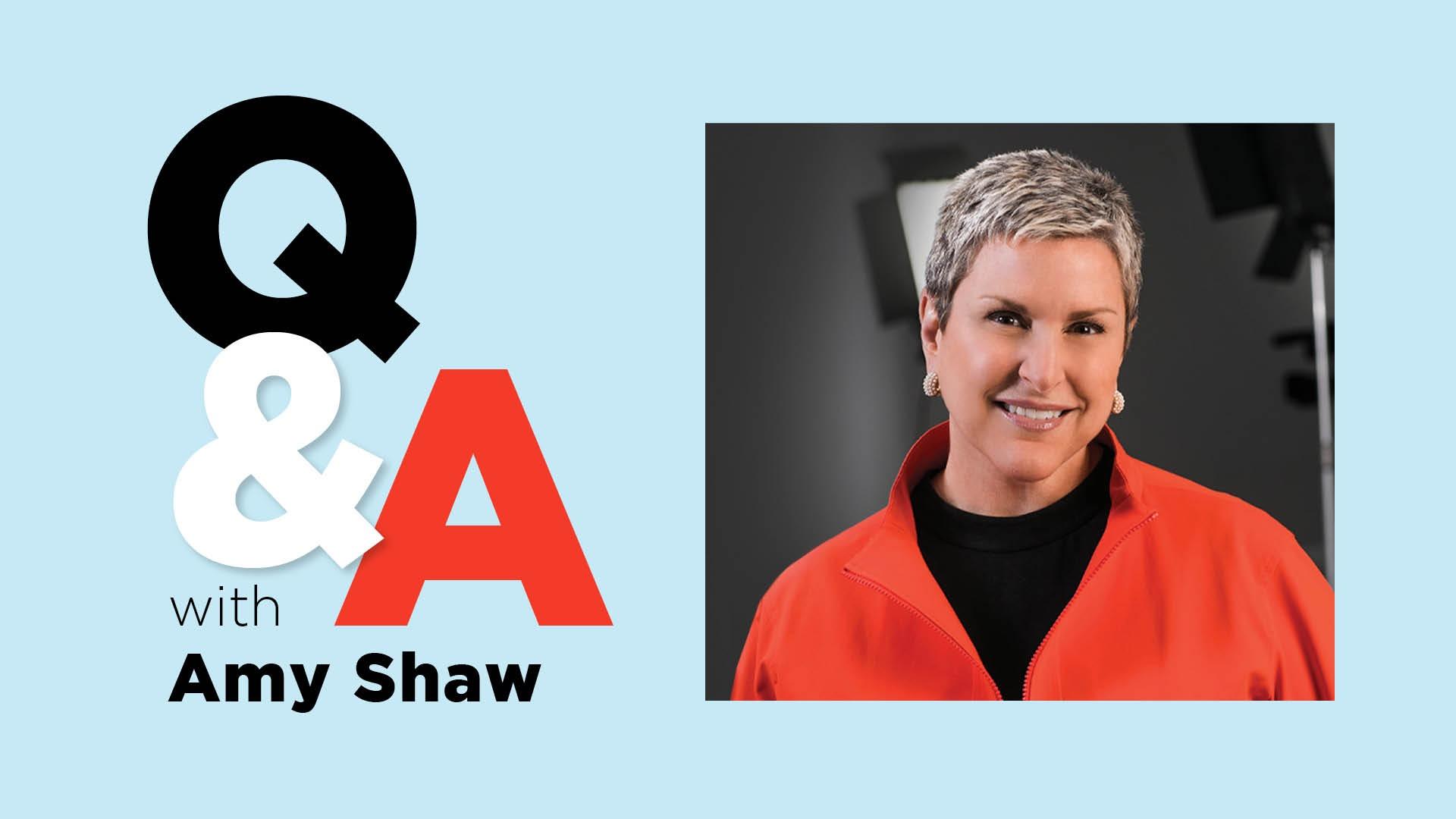 On February 3, Amy Shaw was named the first female president and chief executive officer in the 65-year history of Nine Network.

A native of St. Louis, Shaw had worked in a variety of posts since joining Nine in 2003. She was promoted in 2010 to senior vice president of community engagement and, ultimately, added chief content officer to her role. Upon President and CEO Jack Galmiche's untimely death on April 16, 2019, Shaw led the station on an interim basis.

Then came the pinnacle of her career: "After a rigorous and extensive nationwide search, we are proud to announce that Amy Shaw will be taking the helm of the Nine Network," David Steward II, chair of the Nine Network Board of Directors, announced. "She has done exceptional work as interim CEO and we are excited for her to lead the station." We sat down with Amy to discuss her plans.

Q: What was your first reaction to getting selected president and CEO of Nine Network?

A: It was my great honor to be chosen. I competed hard for the position. I had the luxury of knowing what a wonderful team we have, so I was excited for us to move forward. But I do admit there was a brief moment when I allowed myself to reflect back on my childhood, and how I would come home with my parents from mass on Sunday, and the first thing we would do was turn on the TV and watch European League Soccer on Nine. My lifelong connection to Nine made this even more special.

Q: Even though you had run the station for many months as interim CEO, it must be quite a challenge to face the crisis of the coronavirus pandemic so early in your tenure. What is that like?

A: Actually, in an unfortunate way, we had been prepared to react quickly to crisis when Jack, who I had worked with closely for 12 years, passed away so suddenly. That was a very difficult and tumultuous time.

Q: What did you take away from that experience?

A: I like to say that in crisis you become more of who you really are. And in crisis, I would say Nine is more of who we really are, which is community connected, supporting our youngest learners in particular, and supporting all the people in our community. Our team is pretty special, and I think people in the community knew that, and if they didn't, they certainly do now.

Q: What would you say has been your top priority in serving that community in these difficult times?

A: Our top priority is serving the educational needs of our children, which really means returning to the origins of why the station was founded when we first went on the air more than 65 years ago in September 1954. We went on the air to educate children via TV. Teachers would roll a TV into the classroom, and there was probably only one in the building at that time. They would gather the kids around the TV and there would be special programming on air for kids to learn the core subjects. That just grew and grew and grew. Nine back then, KETC, was a huge innovator in that space and we are known as an innovator to this day.

Q: And you had to do all this in a pandemic?

A: It is quite a logistical challenge, because the team is practicing social distancing, people working from home—in many cases, taking care of their own children—and putting in long hours to get the job done. I'm so proud of what our team was able to do in such a short period of time. The toolkit is just one example. Every person in the organization has played a role in supporting the community through this crisis. As Mister Rogers says, in a crisis, look for the helpers. At Nine, we're helpers.

Q: So almost overnight, you were able to create the Educator and Caregiver Toolkit, among the other resources you've brought together?

A: It was really quite extraordinary. It's online at nineNet.org. All of the resources are readily available, they're free, high quality, trusted, and they're aligned with state learning standards. Everything is designed to help all kids learn. We've never had a time like this when everyone was home, with parents having to work while trying to care for their children and manage their learning at the same time. This has really been new territory for everyone in the country and the world.

Q: How did you update that role for the crisis presented by the coronavirus pandemic?

A: Actually, one of the first things we did was get on a call with some education leaders in the region: school superintendents, folks from the charter community, curriculum and instruction people. What we heard very clearly from them were three key things: One, educators were very concerned about access to resources, meaning that while lots of children have really good internet access, there are many children who don't; two, was that they were very concerned about children from pre-K to grade 4, because while our older kids were likely accustomed to doing some form of distance learning, our youngest children really aren't; and third, the education leaders told us: you're really going to need to help parents feel OK about this, because they're not used to this, it's whole new territory and you need to tell parents to go easy on themselves and to manage expectations.

Q: That's a tall order. What was your strategy for doing all that in a hurry?

A: Very quickly our team took all that information and pulled all these high- quality resources we have available: Nine PBS LearningMedia which has over 30,000 video resources, lesson plans, and printable resources, all aligned with state standards for both Missouri and Illinois. We mobilized to create an Educator and Caregiver Toolkit, taking the resources we already had out there, but pulling them together in a way that was readily digestible. And we also focused on doing everything we could to support our most vulnerable children. We produced on-air messaging with our staff that were educating their children at home so our audience could see that we're all in this together.

Q: Technology helps with that, doesn't it?

A: It certainly does. Most of the more than 40 PBS KIDS® apps for kids and parents on mobile devices and tablets are free. These apps are based on quality PBS KIDS' shows, like Daniel Tiger's Neighborhood, Clifford, Molly of Denali, and Wild Kratts. These are great tools, they're trusted, and things kids can learn from. We're trying to help parents relax a little bit. This can be a time of exploration for our kids. Their lives have been disrupted just like their parents. They're missing their friends. These tools are a great way for them to learn, but also to enjoy themselves.

Q: Along with the renewed focus on local service to children and their parents in these difficult times, a large part of Nine's mission continues to be delivering PBS' solid lineup of favorite programs. What's the show people are asking about the most?

A: People are clamoring for the next season of Victoria on Masterpiece. There have been three seasons of Victoria, and not long ago, we ran a marathon of those seasons to give people a little extra comfort. Victoria has been such a wonderful show for us. There will be a fourth season, but it hasn't gone into production yet. Believe me, when we get information on that, you'll be the first to know. People need comfort right now, to see familiar faces, whether it's with Victoria or local shows like Donnybrook.

Q: It was good timing that you were able to the offer The Polio Crusade: American Experience in that same vein, wasn't it?

A: I have to be candid: American Experience is my favorite public television show. I know it's like your children, it's hard to pick a favorite. The Polio Crusade was so timely. This was a time when Americans banded together. This was a terrifying thing for families and children and those that went through it, just like FDR. It's something that's very germane to our times, but a lot of people won't have remembered it or had a connection to it. This is the type of content we feel passionate about bringing to our audience because you're learning something, but you're also being entertained in the process.

Q: PBS also has received a little extra help from the great Ken Burns during the pandemic, correct?

A: Yes, Ken Burns has been such a great friend to us, and he's offered full access to his content, so we've been running "History Thursday" nights starting with The Roosevelts. When The Roosevelts first aired on Nine Network, we did gangbusters, but I have to say that Nine Network always does great with Ken Burns' content. St. Louis loves Ken Burns. It has been a great way for people to learn and to be connected with some high-quality storytelling at this time.

Q: It sounds like much of what you're doing today is informed by what you've learned during your time at Nine?

A: It really is. I think there's a communal experience with public television. The media landscape is changing rapidly with new technologies and the availability of content; Nine must evolve, too. So much of viewing is done through streaming and DVRs, which is great, but there is something to be said right now about how people have been watching TV as a community. People are seeking reliable information from an institution they trust and Nine Network is tailored for that no matter how people consume our content—on- air, online, or via their phone. We take our cue from the community, because we're part of the community. Just like we always have been.

Q: You obviously have quite a history with the station. What were your favorite shows as a kid?

A: I loved Zoom and Sesame Street. My parents were big fans of Channel Nine, so I can tell you I spent every Sunday night on the couch with them watching Masterpiece. I was reared on Upstairs, Downstairs and the classics, and my dad was a big fan of This Old House, so we watched that a lot.

Q: You seem to view your role at the Nine Network as staying focused on the future, while staying true to its history. Would you say that, in a lot of ways, you've come full circle in your lifelong relationship with Nine, starting as a child and now serving as its leader?

A: I think that's a good way to look at it. I don't want to give away my age, but I grew up in a time when there wasn't cable, not until my teens, so there were only a few channels, and Nine was very important to my family. My dad, who passed away some time ago, would have been delighted, and my mom, who we just recently lost, was beyond proud that I'm leading Nine.

This article appeared in the May/June 2020 issue of Nine Magazine.