The Original Home of Cooking Heats Up 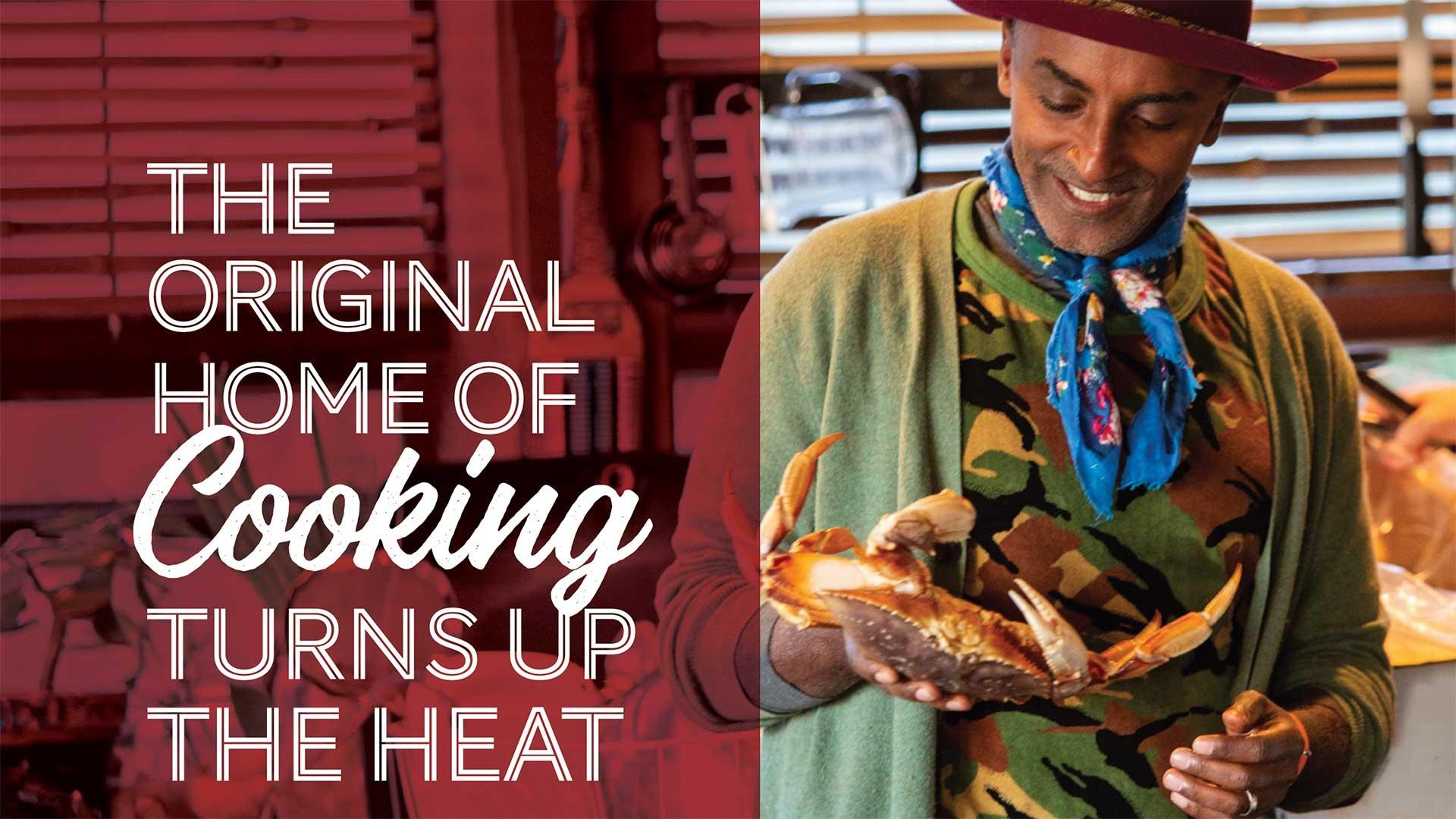 PBS is the original home of cooking and still offers the very best in food and cooking. From A Chef’s Life to The Great British Baking Show to Martha Bakes, PBS programs and chefs have received more Peabody Awards, Daytime Emmy® Awards and James Beard Foundation Awards than any other network.

And, Nine PBS is set to reclaim the cooking mantle. January marks the premiere of three programs. The new series from Vivian Howard, the host of the award-winning series A Chef’s Life, is set to debut in late March—South by Somewhere.

Nine PBS airs cooking programming Monday– Friday, from 1-2 pm, Saturday and Sunday from 10 am–2 pm, primetime specials, and 24/7 on the Nine Create channel.

Cuisine and Heritage of Immigrant Communities

No Passport Required, hosted and executive produced by renowned chef Marcus Samuelsson, will return for a second season on Monday, January 20, 9 pm, on Nine PBS.

Once again, Marcus will explore six different American cities, visiting with both professional chefs and home cooks, for an in-depth look at the rich diversity of immigrant traditions and cuisines woven into American food and culture.

In Season 2, No Passport Required will travel to Houston, home to one of the highest numbers of West African expatriates of any U.S. city; the Filipino American community in Seattle, who are part of the city’s longstanding Asian Pacific American heritage; Los Angeles, where the world’s second-largest Armenian community resides; and Boston, where Marcus explores Portuguese-speaking cultures and cuisines from three different locales: Brazil, Cape Verde and Portugal. Other episodes focus on the Chinese American community in Las Vegas, which has grown tremendously over the last 20 years, and Philadelphia, where Italian Americans have thrived for generations. In each city, he’ll visit local restaurants, markets and family homes, learning about each community’s cuisine and heritage.

An immigrant himself—born in Ethiopia, raised in Sweden, now a celebrated chef, restaurateur, author and resident of Harlem—Samuelsson is passionate about sharing and celebrating the food of America’s vibrant communities. Each episode shows how important food can be in bringing Americans—old and new—together around the table.

“I’m so happy to be working on a second season of No Passport Required,” says Samuelsson. “We have only begun to scratch the surface of the amazing range of immigrant cultures and cuisines found in the U.S. It’s exciting to go on this journey once again and bring attention to these diverse communities that contribute so much to our nation.”

On the heels of a successful debut on public television stations nationwide in late 2018, all-new episodes of tasteMAKERS will begin airing Sunday, January 5, 6:30 pm, with encores Thursday evenings at 10 pm and Saturdays at 6:30 pm.

From caviar made in the hills of North Carolina to single varietal sake brewed in Oakland, CA, to old-world-style charcuterie made in Indianapolis, producer and regional Emmy-winning host Cat Neville (below) dives deep this season to tell the full story of the food movement through the eyes of the people who are redefining the flavor of American cuisine. tasteMAKERS’ visits two unique locations in the new season: an Indian reservation north of Phoenix and sugarcane fields in Honolulu.

Nine Network continues as the program’s presenting station and is working with American Public Television to distribute tasteMAKERS nationwide. tasteMAKERS can be streamed online at nineNet.org and on the PBS App.

The British chef Jamie Oliver (left) is known for his approachable cuisine, which has led him to front numerous television shows. You might remember him from Jamie Oliver's Food Revolution, which aired on ABC during 2010 and 2011. In the first season, he visited Huntington, WV, statistically one of the unhealthiest cities in the US, to try to improve its residents' eating habits. In Season 2, he visited Los Angeles, where his crusade to change school meals was met with resistance.

His latest series, Jamie’s Ultimate Veg, encourages meat-eaters and vegetarians alike to put vegetables at the front and center of their plates, providing simple tips and techniques for turning ordinary veggies into extraordinary main dishes. Seeking inspiration from around the U.K. and the globe, Jamie cooks up a stunning collection of beautiful, vibrant, hearty and healthy vegetarian dishes that are so delicious and easy to make, you won’t even miss the meat.

Going strong on Facebook since October, Chew in the Lou is the place to share your thoughts about the St. Louis region’s food scene, food trends, and food topics with other foodies. We will share some recipes and articles we find interesting as well. Join the group at facebook.com/groups/chewinthelou or on Instagram.

Hosted by acclaimed Louisiana chef Philip Lopez, this new web series from PBS Digital Studios launches on YouTube and IGTV. Inspired by No Passport Required, the series explores the historical and cultural roots of some of the most popular dishes in the Deep South. The series reveals that international influences on the region extend far beyond cuisine and into music, language, traditions and architecture. Featuring interviews with major figures in the world of Southern food culture, the series delves into how history, tradition and down home ingenuity shaped what we eat.

This article first appeared in the January/February 2020 issue of nineMagazine.